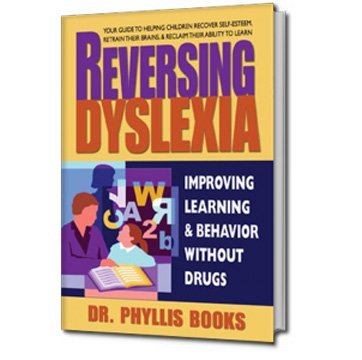 One of the reasons our understanding of dyslexia hasn’t really changed in the last century is because we weren’t seeing the whole problem. If I had stayed in education, I would never have seen the bigger picture either. It took my leaving the field and becoming a chiropractor – the kind of doctor who focuses on the neuromusculoskeletal system, which includes the brain and the spinal cord—to address the questions left unanswered from my teaching training.

Dyslexia is actually a very complex and dynamic situation—far more so than most people recognize—but it can be reversed. To reverse dyslexia and make the act of reading fluid, a solid neurological foundation is essential. Many seemingly unrelated factors can combine to impact a child’s development and behavior. Approaching dyslexia from only one vantage point can be a real disservice to someone with this disorder.

As a condition, dyslexia is certainly more than meets the eye. Although perceptions of dyslexia within the scientific and medical professions vary widely (and are often narrowly focused), this issue is actually layered and multidimensional. In the past, effective solutions have been as elusive as the imbalance itself. In my experience, however, dyslexia is reversible in almost every case, once all the elements involved are uncovered. So have hope. We are just beginning to see dyslexia in a whole new light—a light that will lead the way towards a real solution.

Dyslexia is a relatively modern problem because reading as we know it is a fairly new development in human history. Humans are biologically hard wired to speak and listen. In fact, a human fetus’s ears are fully developed by the sixth month of pregnancy. It is important to note, however, that although humans are naturally designed to speak and hear, we are not naturally designed to read. Reading, or the act of deciphering symbols and assigning them sounds and meaning, was invented by humans.

Although the term dyslexia was coined in 1887, it didn’t come into common usage until the 1960’s. It is derived from the Greek root words dys, which means “abnormal” or “impaired,” and lexis, which meant s “words” or “speech.” While dyslexia is generally considered a reading disability, the fact that it can manifest itself in a number of different ways makes it difficult to describe accurately using such a narrow and simplistic definition. Some dyslexics transpose the words in the sentence or reverse the letters of words, such as seeing a “b” ad a “d”. Some see reverse images of numbers. For other, distracting splotches of color appear on the page. Simply keeping written letters and words the same size and maintaining the same spaces between letters and words can be troublesome. Words or letters may jump around or slide off the page. They may even become blurry, grow in size, or shrink.
In defining dyslexia, however, it must be noted that this condition can be much more than a simple reading problem. It is frequently associated with other symptoms. Spoken words may come out all mixed up, with words and phrases occurring in the wrong sequence within a sentence. Reading aloud may sound jerky and uneven in rhythm. Remembering words and facts from day to day , or even moment to moment, may be inconsistent. Physical issues are also quite common. Dyslexics may display an uneven gait, walking pigeon-toed or with one foot splayed out. Other issues linked to dyslexia include:

A person can exhibit one or more of the previously mentioned traits without having dyslexia, of course. If dyslexia is an issue, though, a number of these signs are likely to accompany it.